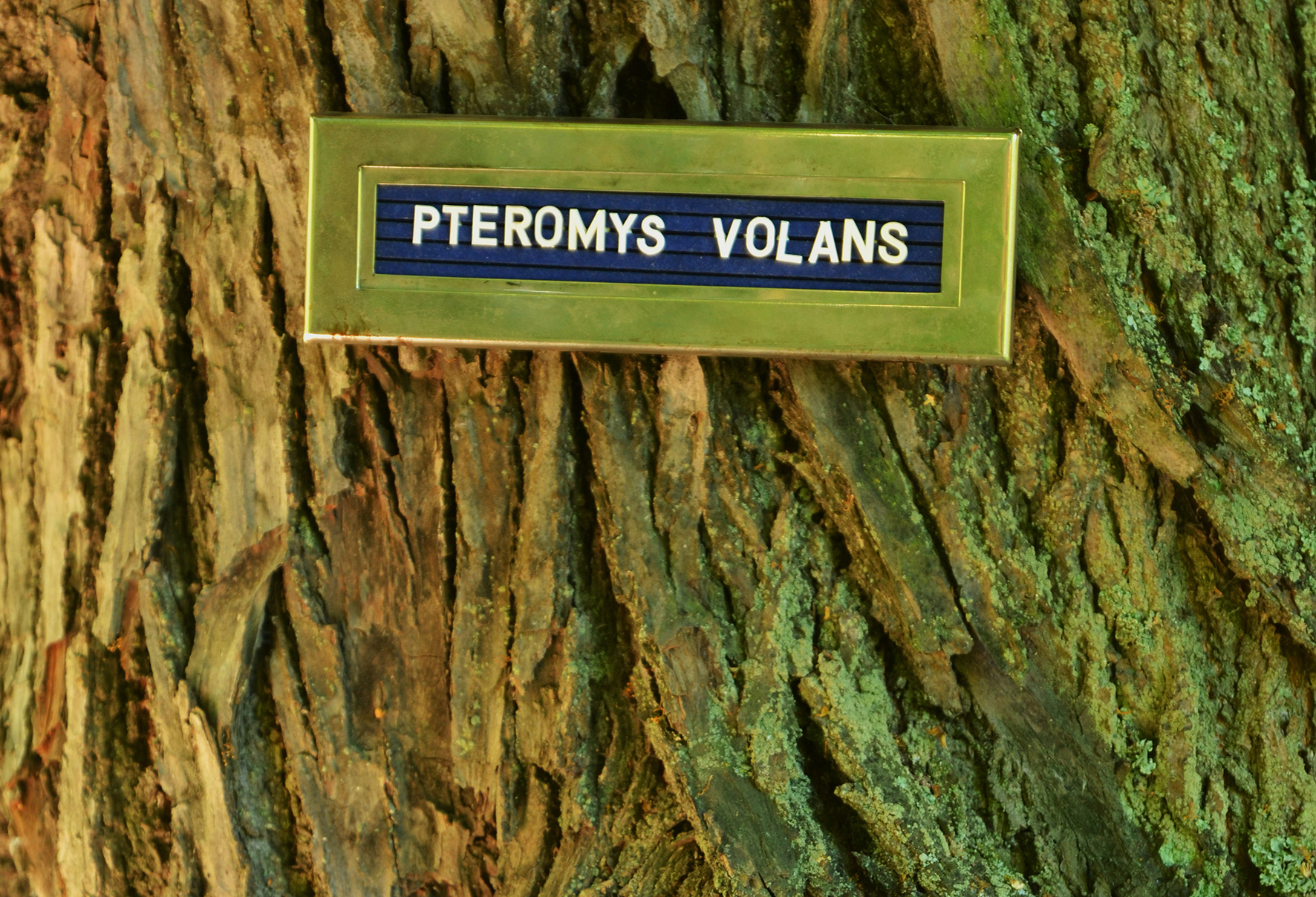 My Neighbor, the Squirrel
Lapinlahti Hospital

'My Neighbor, the Squirrel' is an ongoing installation series that spreads itself into the Lapinlahti park. The small summer cabins, birdhouses etc. mark the imaginary territory and the possibility to live side by side with the Flying squirrel (Pteromys Volans). The installation ponders our ability to question our own views about the boundaries that we as humans give to other species and their everyday lives – especially when this other is a creature that needs mostly its own space and peace.

The flying squirrel is a species arousing discordant feelings amongst people, usually bringing up the question of how humans’ territory is defined. This cute animal has become a symbol for totally different positions: for some it is a species that the human world has almost driven to extinction, while as for some it is a destructive nuisance that prevents construction projects and the economic use of the forests. The Flying squirrel is therefore a so-called “small actor”, that has huge cumulative effects in the perspective of human beings, “the big actors”. After all, the flying squirrel and human share the same living space. The ambivalent attitude people have towards flying squirrel therefore culminates in the actual presence of the species. Whether this presence is wanted or feared, it’s up to the point of view.

Urban planning defines who has the right to access and to control space, and how. These decisions made in the urban planning processes define not only the territories of human beings, but also the rights for other species to live within these human-made boundaries. But what kind of animal is allowed to live as a neighbor to human, and what kind of empathy does this process take? How could we translate the language and the culture of flying squirrel to our human languages? How much does flying squirrels have to adapt in order to be sufficient to live in the human-made world?

The work discusses about animals’ rights to privacy. Is it mandatory that the protected species offer their presence in order to even be allowed to exist in the first place? There’s a growing trend of observing protected species, and this is often legitimized with a positive attitude towards those species. The life of an animal is therefore made into a spectacle manuscripted by humans, and often the lead role is given to a creature that is both sensitive and evading of human sight. Are sharing a same living space and experiencing a presence of an animal preconditions for empathy? Is an animal real, even if we can’t observe it personally? 'My Neighbor, the Squirrel' explores this conflicting field of space, presence/absence and coexistence.

About Kaisa Illukka and Juulia Juutilainen

Kaisa Illukka (b. 1978) is an artist living in Helsinki. She has graduated from both Theatre Academy and Aalto ARTS. In addition to art studies she has also studied at the Creative sustainability program in Aalto University as well as at the Environmental studies department at the University of Helsinki. In her performances and works Illukka has worked together with mushroom rhizomes, plants, bees, dogs, sand, bacteria, a nightingale and an ice age. Illukka studies the relation between art and ecology as well as nature identities.

Juulia Juutilainen (b. 1978) is a cultural researcher, who is finishing her MA studies at the Medialaboratory in Aalto University, where she focuses on the possibilities of digital media in creation of experiential space. She is interested in the processes of signification and identification as well as questions of both power and justice. In her work Juutilainen studies the crossroads between cultural heritage, religion and nature as well as the narratives that both build and validate these cultural processes. She is particularly attracted to the mythical relationship people have with forest.

In July 2016, Mikko Lipiäinen initiated a process of investigating the possibilities of producing community-made paper of local materials with cultural importance for the residents of Aldeia Velha,...

A motorway, a power-station and the entrance of an underground car park on one side – the seagulls, the sea and the park of Lapinlahti hospital on the other. A group of people gathers and starts...