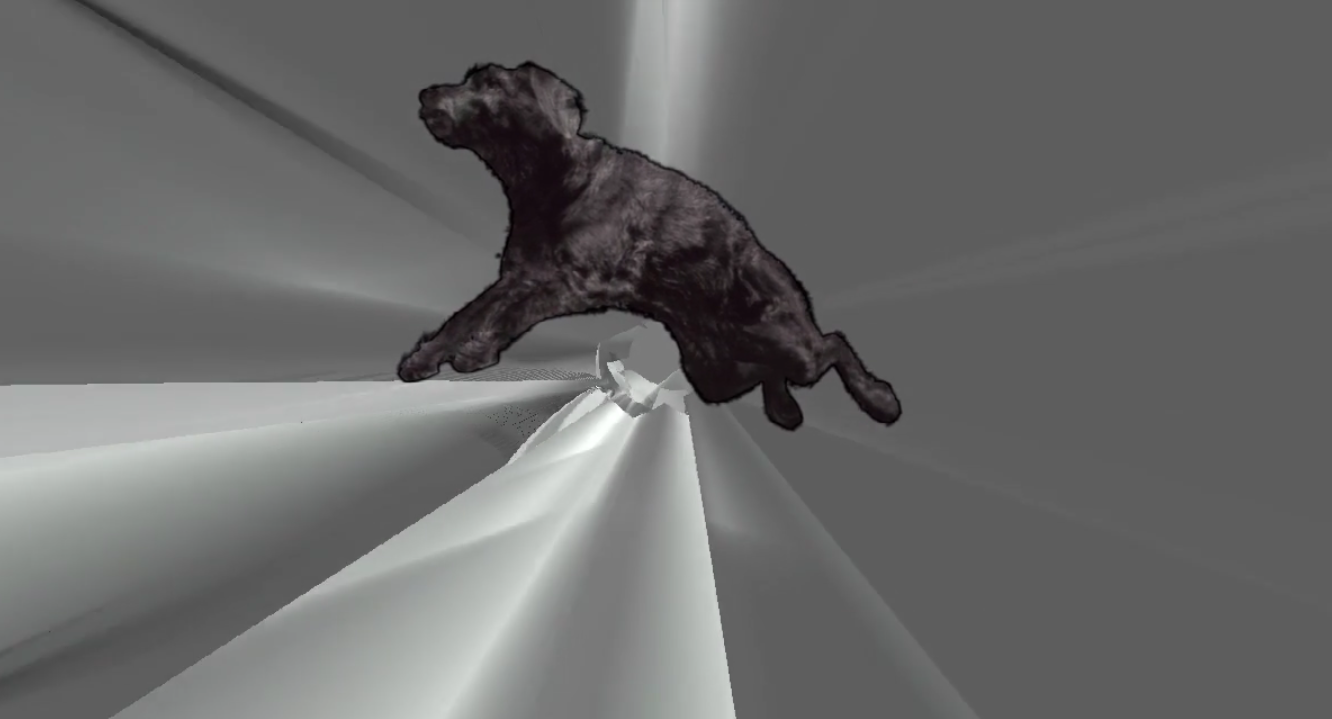 In the process of making the project, we explored Tom's canine vitality expressed through his vocals and gestures. Biophilic attention, in the form of thinking-like-a- dog, was an empathic technique used to understand his state of mind. We experimented in a motion capture studio and sound recording studio. The result was a live generative animation of Tom imaged jumping for a ball created using mocap data of his movements. We imagined what Tom was feeling just before catching the ball as proto-euphoric—feelings of eagerness, expectation, anticipation. In the sound recording studio, Tom contributed a sequence of utterances that complimented this proto-euphoric state. His vocals communicated desire, wonder, excitement, anticipation.

The performance incorporates the live animation and a granular treatment on the recording of Tom's vocals. Computational techniques experiment with extensions of time and experience of space Tom may have had while catching the ball. This soundscape provides a durational call as a foundational element for the participating human musicians’ live responses. Andreyev uses the theremin as one of the instruments in the performance because its sonic characteristics are similar to voice, even canine voice.

When the project is performed we involve the participation of local musicians.

Julie Andreyev is an artist, researcher, educator and vegan. Andreyev’s art practice, called Animal Lover (http://www.animallover.ca) examines animal communication and creativity using modes of interspecies collaboration. The projects take the form of new media performance, video and generative installation, and relational art. Andreyev’s projects have been shown across Canada, USA, Europe, and Asia, and have been supported by the Canada Council for the Arts, Social Sciences and Humanities Research Council of Canada, The BC Arts Council. Andreyev is Associate Professor at Emily Carr University of Art + Design, and Artistic Director of a triannual symposium/ exhibition called Interactive Futures. She is co-founder of the art group Vegan Congress, that holds relational events intended to develop awareness and compassion towards nonhuman beings. Andreyev is a Joseph Armand Bombardier Scholar completing her PhD research at Simon Fraser University in Vancouver. Her dissertation is an interdisciplinary investigation into an expansion of ethics for nonhuman others, examined through interspecies relational creativity in art processes. This research is supported by a Doctoral Scholarship from the Social Sciences and Humanities Research Council of Canada.
Simon Lysander Overstall is a media artist and and composer from Vancouver, Canada. He develops works with generative, interactive, or performative elements. He is particularly interested in computational creativity in music, physics-based sound synthesis in virtual environments, and biologically and ecologically inspired art and music systems. He has produced custom performance systems and interactive art installations that have been shown in Canada, the US, Europe, and China. He has also composed sound designs and music for dance, theatre, and installations. He has an MA in Sound in New Media at Aalto University in Helsinki, a BFA in Music Composition from the School for Contemporary Arts at Simon Fraser University, and an Associate in Music (Jazz) Diploma from Malaspina University-College.

In her presentation, Finnish author Johanna Sinisalo talks about the meaning of wondering and questioning in her literary work. She also describes how reality relates to fiction and how they feed...

For one day, Omenapuutalo will turn into a biochemical lab developed by TOP, a Berlin-based association for the promotion of cultural practice. The aim of the project is twofold: to design a...